An open letter to all the other writers who, like me, panic at midnight about being failures

The first thing you need to do is breathe.

Really, do that. Sit where you are and pull air into your lungs. Feel your body extracting what it needs and expelling the rest. Feel your blood collect it and carry it to all the other parts of you. Feel your pulse, feel the beat of your heart. Feel the firing of your synapses, if you can. Imagine all those little lightning flickers, and then imagine your brain lit up in brilliant rainbow colors as it goes about the endless process of making you who you are.

Reflect on how the myth that we only use ten percent of our brains is just that: a myth. Reflect on how you’re using most of your brain in some way most of the time. You are not a waste. You are not wasted. No part of you will ever be wasted. When you are done being you, every one of your atoms will go on to do something else. You will never run out of things to be, until the day when nothing is anything at all anymore.

So you’ve got all of that going for you.

Do you create? You’re a miracle. Do you create badly? You’re still a miracle, and just because you create badly now doesn’t mean you always will. Do you think you don’t create enough? You create as much as you should, and if you should create more than you do, you’ll find a way to do so. Do you have things left unfinished? You can finish them. If it turns out you can’t, you can’t. It’s not a crime. Forgive yourself for it.

Forgive yourself in general.

And you are not alone. You are not unique. This is not a bad thing, because it means you are in good company. At this moment, feeling empty and useless and afraid, you are one among thousands, hundreds of thousands, and millions that stretch into the past and extend into the future. And let’s have none of this silliness about creative people being somehow exceptional; everyone feels empty and useless, and no one is, and everyone feels alone, and no one is.

You think you will never be the writer you want to be. You’re probably right. Make your peace with that; it doesn’t mean that you won’t be extraordinary. And even if you aren’t an extraordinary writer, you are not a writer who is a person – you are a person who is a writer, and the value of your existence does not depend on your ability to put the precisely perfect number of words in exactly the correct order.

Breathe. Then get out of your chair and walk. Maybe go outside, just for a moment. Look up into the dark and think about where you’ve come from and where you’ll go to. Think about who you were when you were born and who you’ll be when you die. You were born into and of worlds, and you’ll die there. That in itself is something to celebrate. That you are here, in this moment, breathing and heart-beating with your wonderful head like a jar full of fireflies.

Now go back inside and have some tea or something. Pet an animal, if you have one. And go to bed.

Yesterday I finished doing something I’d never done before: Scrapping 95% of a book and rewriting it from scratch.

Initially I was committed to not doing so at all. I wanted to tell myself that it was about principle – dammit, it was the story I told and it was the story it was going to be – but I now recognize that stance as being augmented with a 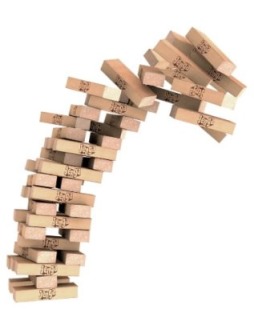 healthy amount of terror, as well as a lot of ego. Because it is terrifying, looking back on something you’ve spent weeks and even months on, recognizing that it needs a major overhaul, and diving in. In some ways I think it’s much less terrifying – or at least it was and still is for me – to start something entirely new. Extensive rewriting feels almost like a sadistic game of Jenga, wherein you’re shifting pieces around, stacking and restacking, and one wrong move will bring the whole thing down. Which isn’t true, of course – nothing you can do can collapse a story beyond repair, unless the foundations of the thing itself are just no good – but it still felt like that when I started out, and I wasn’t sure I could really pull it off.

But I was determined to try.

I finished the first version of Fall and Rising (Line and Orbit 2: Electric Boogaloo) last year, and it was a very different book from its predecessor. It was focused on different characters, and it was nastier,  more emotionally brutal, and possessed of some potentially uncomfortable politics. When it was done, I was very adamant that it wasn’t going to get toned down or lightened up – but then I had trouble selling it. And after a couple of rounds of that, I realized that I had to admit to myself that the problem was not necessarily the publisher – as in finding the right one – but instead the book. It was a good story – I still believe that – but it wasn’t the right story. It wasn’t the right successor. It needed to be something different.

It was really, really hard to admit that to myself. But it was liberating when I did, and that feeling of liberation did a lot to blunt the fear when I went back and hacked it to pieces. It remained as I started rebuilding, and it carried me through until I truly began to feel like I was working well inside the world of the book. It was like giving myself permission to take all the work I did and all the time I put into it and declare to myself that none of that mattered.

What mattered was writing the right story.

So yesterday I finished it. For those who care about length at all, it’s about 115k words long, close to the length of Line and Orbit and in fact a good bit longer than Fall and Rising’s initial version. But way more important: I think it’s a better book, and it’s one that wouldn’t have been written if I hadn’t sucked it up and murdered my darlings.

I’d been thinking that the whole murder your darlings thing applied to small sentences and passages and turns of phrase. It does, and I suspect a lot of why I thought that has to do with the fact that I’m still more experienced with short stories than I am with novels. But it also applies on a macro scale. It applies to books, and to massive chunks of books. It would be difficult to overstate how major that was to realize.

What else has this process taught me? Marketability is not a dirty word. Changing something up in order to be able to sell it more easily is not (necessarily) a dirty thing. I didn’t initially start thinking seriously about a rewrite for artistic reasons, I did it because I wanted to sell the damn book and get paid. That line of thinking led me to the realization that I could make the book better, but I might not have gotten there if money weren’t also a concern. I’m in this game because I love it, but also because I want to someday be able to make (at least most of) a living off of it. That’s not something I need to be ashamed of. I’m embarrassed by how long it’s taken me to internalize that, and I’m still working on it.

So mostly what I’ve learned so far in 2014 is that I don’t need to be afraid of those things. I shouldn’t let them stop me from getting shit done. I shouldn’t let my own ego get in the way of producing good work that people want to pay for. I need to continue to work on getting out of my own way.

None of that is exactly new. But I think it’s all good stuff to start the year on.

I got my start writing fanfiction.

Actually, that’s not completely true: I got my start in writing as a six-year-old by putting together a series of stapled colored-pencil picture books about a magic flower. Also by concocting long and extremely involved

epic storylines with my model dinosaurs and my Lion King action figures. But after that: fanfiction.

I get the sense that writing fanfic – in one’s past and even more in one’s present – is still a somewhat stigmatized activity among professional fiction writers. Probably less so than it used to be – more and more authors are coming from backgrounds in fanfiction, or are at least willing to talk openly about it – but still, I feel like admitting that I’m one of those amounts to making a slightly uncomfortable confession. Oh, you’re one of THEM. Like it’s something that I should be embarrassed by.

The truth is, fanfiction taught me a lot. The truth is that fanfiction has probably played a huge contributing role in getting me where I am now. I met my Line and Orbit co-author through a pan-fandom roleplaying game on Livejournal; we learned to write together through playing with each other’s characters, and we learned that we enjoyed it enough to embark on something original and novel-length. So it hasn’t been a waste of time, and it hasn’t been without value.

But the truth is also that there are several very important things that fanfiction didn’t teach me. That it couldn’t teach me. And I think anytime we’re discussing the value of fanfiction in writing fiction in general, we also need to be very clear about its limitations.

END_OF_DOCUMENT_TOKEN_TO_BE_REPLACED

I guess this actually isn’t much of a confession; I have yet to meet a writer who genuinely enjoys the business of trying to sell the thing they’ve put all this time and effort into creating. I think most of us feel awkward about it at best, and at worst we feel that we’re actively assisting in the process of cheapening this Precious Child Of Inspiration that has sprung from the core of our Creative Soul, lo, as Athena springing fully grown from the head of Zeus.

END_OF_DOCUMENT_TOKEN_TO_BE_REPLACED

Posted in Line and Orbit, Musings