#INeedDiverseGames – and #WeNeedDiverseBooks – because anything less is shitty writing 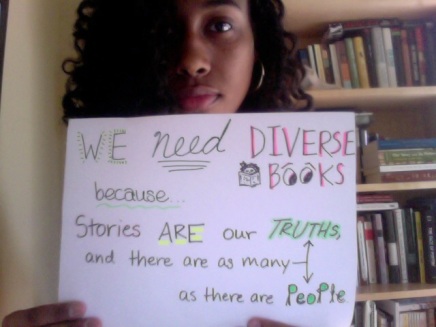 There’s been some great stuff said in the #INeedDiverseGames hashtag in the last couple of days, though if you check it out – and you should – be aware that of course people with other agendas have found it and are being ugly in it. Not all of it is overtly ugly, though, in the same way that not all of the people supporting the GamerGate crowd are actually monstrous assholes. One of the things I saw linked – and I’m sorry, but I can’t now seem to find it, so you’re just going to have to take my word for it – was a rather long post that picked apart the demographics of people who play games, delivered an analysis, and ended with the claim that there’s no solid evidence that lack of representation in media has detrimental psychological effects (untrue) and questioned whether diversity really is necessary in games. “It would be nice, sure”, said the author (I’m paraphrasing somewhat). “But is it something we really need?”

I mean, maybe you don’t think we do need it. Maybe you don’t think it’s actually necessary. Maybe you think it would be cool and you’re not against it as such, but you think people are making kind of too much of a Thing out of it and they’re just looking for something about which to be loud and angry. As the demands for more diverse and inclusive SF&F have intensified we’ve seen the exact same kind of claims, usually along with protestations that things aren’t actually that bad anyway. It’s not necessary.

Got a question for you, then: Do you care about good stories?

Just that. That simple. Presumably you do – if you read books, if you play games, if you watch TV and movies, presumably you’d prefer to be reading and playing and watching stuff that’s actually good, right? You’re not going to embrace stuff that’s shitty and boring. If someone came up to you and said “wow, you sure do prefer tame, safe, bland, status quo-embracing shit, don’t you?” you’d probably push back against that pretty hard, right? And yeah, a lot of us like stuff that’s loud and silly and focused entirely on being entertaining with no pretensions toward anything more and that’s great, but I don’t think any of us would cop to loving it because it’s shit and wanting nothing except more shit for the rest of whatever.

And if you write books and short stories, if you make movies and TV and games, I’m guessing you feel even more strongly about this. You’d ideally like to be making good stuff. You probably don’t want to make shitty, boring, unimaginative things. You probably wouldn’t like to see your chosen field choked with shitty, boring, unimaginative things. We all want to be proud of what we do, and we want to be proud of the community in which we’re doing it. If we’re creators, we want to be creating good things, and we want to be surrounded by people who are making good things, because they push us further, make us want to do more, make us reach for greater creations. Even if you’re writing pulpy, silly stuff, even if you’re making those same big, loud, entertaining, unpretentious spectacles, I’m sure you want to make the best damn big, loud, entertaining, unpretentious spectacle you can. If you’re a creator, I’m going to give you the benefit of the doubt and assume that you actually give at least a little bit of a fuck about what you’re making.

So here, if you refuse to accept anything else, is the reason why we need diverse games and books and stories: Anything less is shitty writing.

It’s status quo, it’s tired, it’s boring, it’s bland, it’s unimaginative, it’s been done to death, it’s shitty shitty shitty. And if you give even a little bit of a fuck about your craft, you have no excuse whatsoever for being satisfied with it, let alone defending it.

Know what else? It’s also not true. Because here’s the thing: writing stories is about telling lies that are fundamentally true, and any writing that doesn’t do that on a foundational level is shitty writing. Telling a story is about creating characters who feel real, who are recognizable to us even if they aren’t like us. Truly great writing will open a way for us to feel connected to people who are very different from us, who themselves represent an expansion of how we see the world. And the world is diverse. Fabulously so. The world is rich and wild and beautiful with diversity – it’s a treasure house of diversity, of so many different people with so many different experiences, knowledges, struggles, histories. These are deep waters, friends, and they are teeming with glorious diversity. Each element of difference is a chance to tell a new story, to weave a thread into a larger, grander tapestry. And the stories that do this don’t have to be anything but entertaining. They don’t have to be the next Academy Award-winning film, the next show to get showered with Emmys. They don’t have to be books and short stories that win Nebulas and Hugos and Campbells. They can be loud and big and silly and fun, and aim for nothing more.

That doesn’t mean they can’t also be true. It’s not a burden to make them true. It’s not difficult. It’s easy. Just be willing to write stuff that isn’t shitty.