Crowflight: What the hell it is 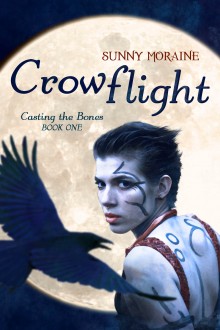 I’ve been namedropping Crowflight a lot around here – for those of you just joining us, it’s the dark fantasy novel that I have coming out in September from Masque Books (Prime’s new digital imprint, which is now offering all kinds of tasty reads) – and I think it’s probably a good idea at this point to go into some detail about what it is.

SO. For your edification: A Crowflight fact sheet.

Be on the lookout for goodies all this next month, including excerpts, a chance to win the book, and possibly book-related jewelry that I’ll be making.

I want to stress that the series name is just a placeholder; we’re still flailing around trying to find something that works. But yeah, I’m pleased.

So I’ve been yelling about this across various social media platforms, but here it is again:

I have signed the contracts for my dark fantasy novel Crowflight (which was formerly known as A Murder of Crows), which will be released in September by Masque/Prime Books.

Which is really very exciting except that now I have to go write the other books in the series.

Will update with more details when I have them.