Turn is a member of the ancient Crow tribe, a Psychopomp in training—a guide of souls into the lands beyond death—with a bright future ahead of her, until she witnesses the suspicious loss of a soul between worlds. Accused of losing the soul herself, Turn is exiled to the Shadowlands beyond the Crow’s city, lands occupied by the mysterious and secretive Raven tribe, weavers of dark magic and suspected by Turn as playing a role in her exile.

But when Turn is saved from sickness and starvation by a Raven, everything she has always believed to be true is thrown into question. As she struggles to adapt to life among the people she once feared, terrible truths begin to emerge. There is a dark conspiracy behind her exile—a rising power that threatens to destroy everything that the Crows stand for, and even to upset the balance between life and death itself. And Turn may the only one who stands in its way . . .

In exile from her home and her people, Turn – once Crow and psychopomp-in-training – is living among the mysterious Ravens, a people steeped in magic and forgotten history. Despite a period of relative peace, Turn is restless and struggling to find her place among her adopted tribe. Complicating things are her feelings for her friend and companion Ava, which are both changing and intensifying. And of course, peace can’t last. Unexpectedly, an old friend appears bearing bad tidings, and the Ravens are faced with a choice between fight or flight. But the choice may not be as clear as it appears, and Turn suspects it may be informed by an influence that means to destroy them.

The lost tribe of the Moravici, supposedly stripped of power, are not as dead as they seemed, and are extending tentacles of control and dark coercion into places Turn didn’t believe possible. The Crows, convinced that the Ravens pose a lethal threat, are preparing to make war. In Sol, the world of the living, the dead are rising, and they have an appetite for flesh. The Ravens are arguing among themselves, unable to take action. Despairing, Turn sees little hope of saving anyone.

But of course, help can come from the unlikeliest of places. The question is what price it will demand. 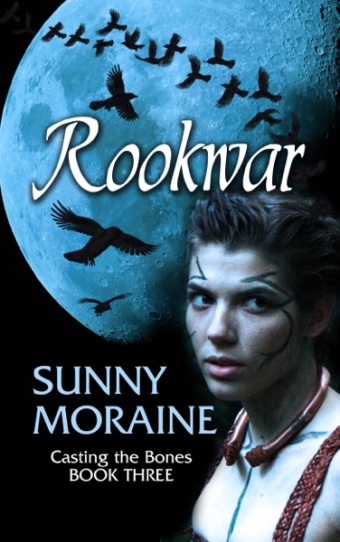 Led by the exiled Turn, the Crow city of Lune has fallen to the invading force of Ravens. But the evil Moravici have not yet been defeated, and as the difficulties of controlling an occupied city intensify, the Moravici launch a direct attack on Sol itself, violating the sacred process of death and raising corpses to obscene life – corpses with a taste for living flesh.

Badly injured in the battle for Lune, Turn struggles to hold onto her sense of purpose. But when she displays a new and potentially dangerous power, she is driven to embark on a dangerous journey for the Rook city of Calvaria, where the truth behind the rising of the Moravici may ultimately lie.

As ultimate war between the three tribes looms on the horizon, Turn and her friends must fight alone to save them – and the twin worlds of Sol and Nicht – from certain destruction. And what’s at stake may not be only those things, but the fabric of reality itself.