filling holes in the world 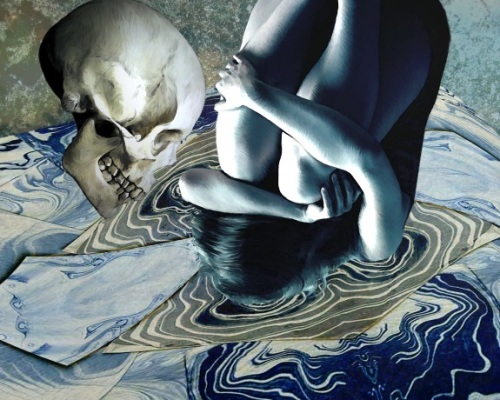 Today “Dispatches from a Hole in the World” – my story for Nightmare’s Queers Destroy Horror! issue – went live, so you can read it here. If you want. If you do, fair warning: it’s about suicide, so if that’s a trigger for you, proceed with caution. Mental illness is also in there.

I’ve been writing less in the way of short fiction recently – disappointing, a little, because I love the form – and I think there are a variety of reasons for that, but I think one of them is that the kind of short fiction I write has taken a darker turn, and it’s more difficult to stay in that place for any length of time. It’s more difficult to go there at all. A lot of my fiction has always been dark, but at some point, a little over a year ago and maybe more, I made the decision to finally turn inward and write things with material pulled from some of the rawest and most painful parts of my psyche. The first true result of that was “Singing With All My Skin and Bone”, also published in Nightmare. It was terrifying to write. It was incredibly cathartic. It came very quickly; I finished it in about an hour and it needed very little work afterward.

It was terrifying in part because it’s about dermatillomania, which is a disorder that isn’t much talked about and isn’t well understood – by people who don’t have it; the people who do understand it all too well. It’s an incredibly difficult kind of mental illness to talk about, because it involves compulsive behavior – which we also don’t understand very well – and because it involves self harm in a context we don’t usually see it. I hate and am not playing the Mental Illness Olympics game, but as a culture I think we have an easier time talking about self harm as a result of depression than self harm as a result of literally not being able to stop.

Enjoying it, even. As a kid I found it soothing. Painful but soothing. Still do.

I was tormented for this. A lot of us are. A lot of us grow up so ashamed of it that we can’t talk about it, not even to mental health professionals. I’ve found it almost impossible to talk about, which is why I wanted to. I wanted to write about it because I didn’t want to write about it. Because there was blood in that story, and not just literally. There was marrow. I knew it would be good, so I knew I had to.

(It’s also the title of my forthcoming short fiction collection)

The same is true of “Dispatches”. I wrote it during a very bad year (in some ways, not in all) during which I had lost my departmental funding and I was adrift in my PhD program (that hasn’t changed), and I was unemployed and having no luck finding a job that would pay an actual living wage. I was feeling isolated from people who used to be close friends. The entire world felt claustrophobic and scary. I felt sick. Sick in the sense of part of me is not working correctly.

In the midst of this, I fell back into fandom after almost fifteen years away from it and found something of a circle of connection. It helped. I could see ways in which it might hurt if I disappeared into it, but it helped.

So I wrote about it.

“Dispatches” is about that feeling of sickness, of disconnection, of looking for connection in the midst of utterly terrifying loneliness. It’s also about how the most terrible things can bring people together in a kind of community that never existed before; I didn’t really think about this until afterward, but a community of kids faced with an epidemic of suicides taking care of each other in a way adults can’t or won’t is something of a parallel to the reaction of the queer community to the worst days of the AIDS crisis.

The fact that both the suicides and the community are facilitated by social media isn’t an accident. I didn’t really think about that either, not at the time – a lot of my writing happens on pure instinct – but yeah.

It’s also an Angry Millennial Story. Because I think we have a lot to be angry about.

No one was sure how it was spreading, or why, or who was going to be next. People feared for their loved ones, their friends and family. People feared for themselves. Pundits proclaimed doom with excited solemnity. Religious leaders got gleeful hard-ons for apocalypse. People blamed technology, peer pressure, the alienation of a generation raised in the midst of crushing debt and recession and increasingly extreme weather and constant war and a general sense of hopelessness.

But when that nightmare year was over and things finally began to taper off, all we were left with was questions.

The feeling that someone should be looking out for us but no one actually is. And that then we’re blamed for having a difficult time with the whole business of living, and with living in the way we’ve been told we should:

I don’t go home. I wander around downtown until dawn. I look at the Capitol dome and I think about how none of those people in there have anything to do with us. About how, after the Year of Suicide, we all gave up. Voting rates for our generation are the lowest of any generation in history. They bemoan this, our apathy. How disappointing it is. How disappointing we all are.

Look: don’t you judge us for opting out of a fucking lie. Don’t you ever do that.

We went to war and a lot of us didn’t come home, and none of you ever noticed.

Not literal war. I mean, it could be. I was talking more about… living, really. Trying to live.

It’s not as easy as it used to be. I think. More and more, for some of us, I think it’s beginning to feel like a fight.

But I don’t get the sense that we’re apathetic. Not about some things. Not about each other. Because the communities I’ve found online have been intensely supportive, intensely close, and they’ve been about sharing and creation and the joy of both of those things, and about how sometimes, yes, you should be congratulated for getting the fuck out of bed in the morning, and that’s not entitlement.

It’s just how things are. Because most days you have to get the fuck out of bed.

I think every generation goes through the mom and dad just don’t understand phase, but this feels different to me, because I’m in my early thirties now and so are a lot of other people I know, and a significant number of us still feel that way. Maybe not regarding individual parents, but regarding their generation. That these people – who still control most of the stuff and the things and are responsible for how it all works – don’t know how to take care of us, and a lot of what they’re doing is just making it worse and they seem to think that’s pretty much fine, so what we have is each other. And that doesn’t always save people, but it’s something.

Last night a friend of mine – we’re not really close but we’re in the same fandom and we interact a good bit – left some very worrying messages on her Tumblr. We had reason to believe she might be in danger. No one was having any luck getting in touch with her; she wasn’t responding. So someone posted about it. We’re worried for this person, this is the area where she lives, does anyone live near her? Does anyone know her? Can anyone make physical contact with her? Please reblog this. Please help.

We did. Tons of reblogs. Lots of information sharing. In the meantime, people leaving messages for her. Please take care of yourself. You are valuable and you are loved and you are important. Please be safe.

We – a bunch of people united primarily by a romantic pairing on a silly TV show about zombies  – leaped into action in a way I don’t think many other people could have. And we did so with love.

Kids and their phones, right?

These places, these sites and mediations of connection, they’re not stupid and they’re not worthless. They’re real places. They’re places of great despair and a hell of a lot of hope, and they’re places where people hurt and heal each other. They’re complicated places. In short, they’re human places, and the humans who live in them understand that better than anyone.

“Dispatches” does not end happily. At least, the second to last section doesn’t. I ended the actual plot in what I felt was the most personally frightening place I could imagine. It’s a horror story. So.

But this is the actual ending, and while the story is about death and pain and terror and loneliness, and insanity, I think the last line is really its heart:

I wish I could tell you something. I wish I could give you an answer. But in the end no answer could have made any difference. And the questions we were left with never mattered.

All we ever had was each other.

2 responses to “filling holes in the world”