I recently started an Etsy shop, which is really only tangentially related to my writing, except that, like my writing, it supplements a very modest graduate student stipend. Except the two are related in some other ways as well.

Everything creative has a process, this included. Making these things is clearly a very different process from writing a story, at least in some ways. But they’re both active, both potentially arduous, both painstaking. They both may involve a lot of time. On the one hand the payoff is uncertain, but on the other hand there’s immediate payoff in the form of pleasure in the act of creation.

Both do not begin so much in creation as in the act of finding.

My husband and I collect all the teeth I use in making my jewelry; we don’t buy any from others. We’re fortunate enough to live within about an hour’s drive from the western shore of the Chesapeake Bay, the Calvert Cliffs area of which falls away to expose the Calvert and Choptank formations, which are rich in a wide variety of Micoene fossil shark teeth, usually ranging from 15 to 18 million years in age. The variety is one of the coolest things about what we find; we’ve picked up teeth from extinct sand tigers, tiger sharks, snaggletooth sharks (my personal favorite), makos, hammerheads, lemon and gray sharks (probably the most common kinds we find), the fantastically rare cow sharks, even porpoise teeth and dental plates from rays. Often we find bone fragments, usually from whales and porpoises. Once, on a most fortuitous day, we found a small megalodon tooth (the one on the right is the meg, the one on the left is a mako): 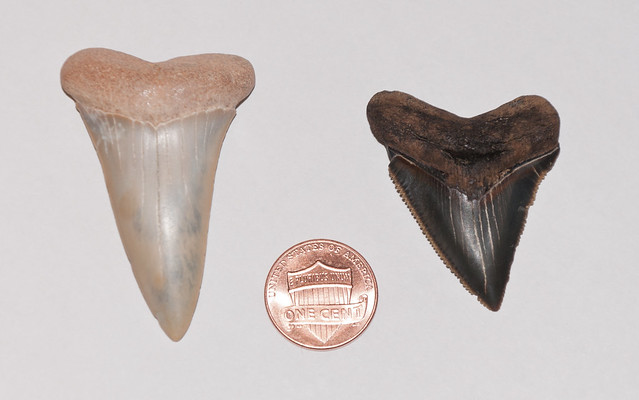 Sometimes we have to sift for the teeth, but more and more often, as our eyes have gotten better at spotting things, we’re picking them up right out of the surf. Just to give you an idea of how long it’s taken to be pretty good at this, we’ve been hunting seriously for about a year now. In warm weather we’re at the beach almost every weekend.

The project of making jewelry started when it became clear to us that we had way more teeth than we could reasonably do anything with just for ourselves. I’ve always liked making very simple jewelry, and it seemed to us that something pretty and interesting could be done with some of the teeth we had. So we got some materials and I got to work.

So how do the pieces come into being? The shape of the backing bead I’m working with has a lot to do with the kind of tooth I select, but the tooth also does a lot to determine the color of the bead. Sometimes glossy black glass sets off the subtle brown and gray and reddish tints of the teeth (fossil teeth are so beautiful just as they’re found; I honestly don’t understand people who do things like plate them in gold). Sometimes earth tones work best. Sometimes a pearlescent white shell does the job. And of course, the accent beads can harmonize with the backings for the teeth (garnet, agate, softly colored glass), or they can flare (amazonite). A lot of it comes down to mood.

Like a story, I begin with a base of something I’ve discovered, around which I assemble separate elements. At the end, hopefully, I’ve brought them all together into a pleasing whole. Even more hopefully, it’s a whole that someone else will actually want.

But I don’t get anywhere unless I get out there and start looking.

One thought on “Stories and Shark Teeth: a comparison”