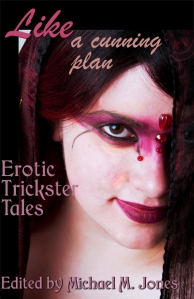 available in a variety of delicious formats for your consumption pleasure.

From Coyote to Loki, Anansi to the kitsune, tricksters are a staple of mythology, folklore, and pop culture. Some might call them selfish, but we all know the truth: they’re just focused on the next big score or clever trick. Armed with a sly smile and quick wit, they act as agents of change, leaving chaos and confused victims in their wake. Of course, tricksters also make great lovers–unpredictable, creative, adventurous, and experienced in all the right ways.

My story “The Kitsune’s Laughter” is one of two featured takes on the kitsune legend; mine makes use of the old couple-unable-to-conceive trope — with a twist. NSFWish excerpt under the cut.

“Sleep eludes you?” Chikako drew up beside her and Yumiko could feel the warmth radiating from her, a pocket of it in the cool night. “I as well. But not your good husband.” Her voice seemed to take on an almost mocking tone, light and sing-song. “Does he make you happy?”

Yumiko stared at her, taken aback. For a moment or two she said nothing. Where were the words for such forwardness? …And how to answer? Honestly? With a lie, which would almost certainly be easier? And why was she even considering the two as options?

“I–yes,” she said at last, fighting the blush she could feel rising in her cheeks. “Of course he does.”

“Ah-ah.” Chikako turned, seeming to dance around her on light bare feet, laughing softly. In the moonlight she looked and felt different than she had in the house, wilder, stranger. It came to Yumiko all at once that she didn’t know who this woman was, that although they had talked away the remains of the day she had given them very little in the way of sure facts about herself, that she did not even know the name of the village the woman claimed as home. Alarm flashed through her, superseding the blush, and just then Chikako caught her wrist in a surprisingly strong grip, slipping against her back, her other hand on Yumiko’s hip. Yumiko drew in a sharp breath. Overhead, a dark shape on the roof of the house, an owl hooted and flew silently away.

“This is not what Inari Okami tells me,” Chikako breathed, hot against Yumiko’s neck.

Alarm instantly gave way to a pounding wave of confusion. Yumiko froze, half turning, craning her neck to look the woman in the eyes, her own wide and staring. Inari? But this was–and then she thought of the flashes of white in the brush as she had made her way home from the shrine. The knowing looks of the stone foxes at the sides of the altar.

“A merry chance,” Chikako purred. Her lips just touched the side of Yumiko’s neck, and a shiver spread across Yumiko’s skin like ripples. “A merry chance for a merry game. Little Yumiko, you looked so sad at the shrine today. Great Inari appreciated the sake.”

“You’re–” Yumiko started, and then stopped dead. She didn’t know how to finish it. Not human, she was thinking, but to articulate it any further might be dangerous. Powerful beings could be threatening even when they were benevolent. Even when they were… pleasant.

“Oh, don’t get me wrong,” Chikako went on. “I might have come anyway, after seeing you there. So tempting. But at least this gives my fun some divine sanction. Which is good to have. Inari is protective of its supplicants.” Her long fingers were wandering up the front fold of Yumiko’s yukata, tugging gently, suggesting what they might do more than actually doing it. Yumiko felt the swelling firmness of breasts against her back and a rush of heat between her thighs. It had been so long since Shoda had touched her like this.

Chikako laughed, a sound like soft bells, and turned again on light feet, releasing Yumiko’s wrist and pressing against her from the front. She leaned in and kissed the corner of Yumiko’s mouth, a gesture so full of playful affection that for a moment, all of Yumiko’s alarm almost vanished. “Why, haven’t I said it? Just a little fun. And perhaps to help you with your problem.” She slipped an easy hand between the folds of Yumiko’s yukata and touched her belly, fingertips dancing the same little spirals that her feet followed. “Between you and I, pretty one, you’re not the problem anyway.”

Yumiko’s breath caught in her throat–and half of it was Chikako’s insistent hand, all at once so intrusive and so dangerously delightful, barely inches from the heat collecting between her legs–but even that was momentarily obscured by the weight of what Chikako had told her. “You mean, I’m not–”

“You’re a fertile field, pretty one.” Chikako kissed her again, more fully and more lingering. Very distant, the owl called again. “But his seed is weak and cannot take root.”

And all the heat turned cold. Yumiko started back, shoving Chikako’s hand away, her throat abruptly tight. It felt like a cruel joke–it was a cruel joke. So it wasn’t even her own fault that her womb was empty; so why was this woman here now, teasing her, when the real cause of the trouble was inside, filling the house with his rumbling snores? “Don’t play games with me!” she snapped, forgetting her fear of untested power, of an inhuman spirit, of a demon. “If it’s really him, then… then what am I to do?”