So having abandoned the audio posts for now, I’m looking to jump back into the swing of things with actually writing, and to that end I’ve decided to pick up the Muse Monday/WIP Wednesday posts again. Because I think the template works well, on the whole, when I can bludgeon myself into keeping up with it. 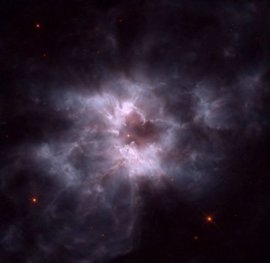 through it yesterday. I still intend to get some further outside crit on it, but I’m largely comfortable with the meat of it as it stands.

It had its inception when I stumbled on the concept of iron stars — a theoretical kind of endpoint for a star that would only be possible mind-bending lengths of time in the future (and only, apparently, if the proton doesn’t decay). The idea of a cold sphere of pure iron spinning through the post-stellar darkness blew my mind in the most evocative of ways, and anything that blows my mind in just that way is going to have me trying to hammer it into something story-shaped. I’ve also been wanting to write something about loss and time travel for a while, and the ideas all just kind of gelled. Vita and her AI companion CERA and her lost love Kendra emerged from that and finally I had my elusive story-shaped thing.

Excerpt under the cut. Enjoy.

Troubleshooting is different when the computer has been jacked directly into your brain for the better part of two years. You know it like you know your own internal workings, which is to say not well at all. But you can feel your way through it in a more instinctive fashion. You’re fumbling in a dark room–in a very systematic way, in a grid pattern, protocol by protocol–but you feel that it’s a room in which you already know the layout. You’ve been here before. You saw it once, in a memory. In a dream.

Some of the shattered pieces of the array’s CPU might be repaired. I can feel the pieces scattered across the floor of the dark room; some of them are missing but many seem to be there. Once when I was small I broke a china horse that belonged to my mother and frantically glued it back together before she found me. I never found the tail, a piece of the flank, or the back left hoof, but if you didn’t look too closely it still looked enough like a horse. This might be like that. I might regain enough functionality to fly dim instead of blind.

I lose time when I’m fully interfaced with CERA’s systems. Some of it is simple micro-focus, and some of it is that inside CERA, time doesn’t work the same way–I always found that appropriate, considering what we do. So I’m not sure how long I work inside her, feeling the pieces of her back together, turning them to make them fit, discarding the ones that seem twisted or misshapen beyond repair. At some point I feel a buzz and I pull back enough to hear her.

When I bite down on my bottom lip, enough of me is still in my body to feel the pain. It’s better than nothing. What about visuals?

Visuals were never offline, Vita. There’s something in her voice that feels caught between amusement and annoyance. She can’t feel, but sometimes she can almost fool me.

I know that’s what the diagnostics are telling you, but I still can’t see a fucking thing.

The visual feed is functional, she says again, and this time she sounds impatient, all amusement gone. And then she’s silent. Because what else can she really say?

And maybe there’s nothing to say anyway.

I don’t know how long I join her in the quiet. I’m out of her and back in me, but time is still slippery, and with chronometrics offline it feels unreal. Which I guess it always was. But at last I stir and open my eyes into the darkness again.

Okay. We’ll work with what we have. CERA, if the beacon is still–

Proximity alert. We are approaching an object. I go still in the cocoon, already vaulting to assumptions. We’re okay. We’re going to be saved.

Even if some part of me knows better.

This entry was posted in Excerpt, In progress, Science fiction, WIP. Bookmark the permalink.