“Catch and Release” up for a best-of vote(!)

So this is good news in an otherwise difficult week: Circlet Press is going to release a print anthology of the best of their digital library in honor of their 20th anniversary (yay Circlet!), and my 1001 Nights retelling in space, “Catch and 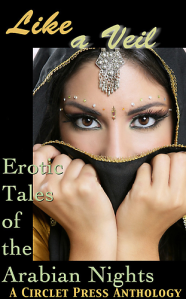 Release”, has made the shortlist. The final ToC of the anthology will be decided both by Circlet’s editors and by a reader poll. So if you read “Catch and Release” and you’d like to see it in print, you can go here and vote for it, as well as up to four other stories. And you should –  there are some fantastic stories and equally fantastic authors on that list.

Circlet’s made a business of putting out not only top-notch erotica but also top-notch writing, period – I’ve been continually impressed by the quality of work that I’ve seen them put out, and it’s been an honor to be a part of the anthologies in which they’ve included me. They were actually my very first publication ever and I’ll always be grateful to them. Congrats, Circlet. Here’s to many more years of SFnal porny goodness.

I’m including a lengthy and NSFW excerpt of “Catch and Release” below the cut.

It takes him a second or two to get the field down with how much his hands are shaking, but he calms them, closes his eyes and takes a few breaths, and even the stale, recycled air is soothing when pulled in at that amount. When he opens his eyes again, the field is down, and it takes another couple of commands to lower the tray and open the column’s panels with a soft hiss, making an opening he can walk through.

Everything echoes tinnily once he’s inside, and usually he doesn’t spend much time in here, the air strangely thin and a profound feeling that he is somehow closer to the vacuum here than at any other point in the ship except the main airlock, which he knows isn’t true, but he also knows by now that here, feelings count for a great deal.

And still he hesitates, standing over the little cylinder. It doesn’t look like anything. He knows that technically, he could be bathing in radiation, though the scan at least hadn’t detected any emissions of any kind. Still. He swallows hard, bends and picks up the thing.

It’s astonishingly light for how dense it’s supposed to be. It feels as though it might contain nothing. So perhaps it does. He turns it over in his hands, squinting at it in the bright lights that ring the inside of the intake column. It’s smooth, metallic, featureless but for a small panel set into one end. He knows he shouldn’t touch it. He touches it. It depresses very slightly. He knows he shouldn’t press it. He presses it.

Later, he will decide that any number of things could have made him do it. The laughter of the people in the pub, the flush in his face, or the boy-self, lying on the rooftops of the new Baghdad, staring up and dreaming star-dreams. Aiwa. Dreams that stayed that way, only dreams melting away into the everyday slog that his life up here has become. To catch something big. To have a good story to tell, one that doesn’t make them laugh or make his face burn. Yes, it could be so.

But he will also know that none of those things is the real reason why. He will know that it is her. And here she is, standing in front of him, her long hair full of starlight.

It’s the hair that he sees, at first and most clearly. Then the rest of her comes into focus, though whether it’s his eyes or reality he’ll never be sure. Her long limbs, almost bizarrely slender, a half inch away from alien, the transparency of her flesh, her essential nudity. He can see the lights of the column shining through her cheeks. Her skin has a faintly blueish tinge. her eyes are closed, and she is making no attempt to cover herself, though her hair floats around her and now and then passes over her small breasts. Suleiman looks down, momentarily unable to draw breath, and he sees that the tips of her toes are only just brushing the floor.

Her eyes open. There are no pupils there, and they are the color of the densest parts of the Milky Way.

Have you come to kill me?

Suleiman shakes his head. It’s all he can think to do. Her voice is low, smooth, quiet, and does not even seem to be sound as he knows it, for it comes from the very center of his head. “I…” he starts, hands at his sides, though they already itch to reach for her with the same itch that brought him back up to this deck in the first place. “I found you.”

It occurs to him to wonder if he might already be dead.

She cocks her head slightly, lifting her arms in a kind of supplication that becomes a dance that becomes an echo of flight that becomes merely her, if she can be called “mere’ in any sense of the word, floating before him with her hands held out, palms up. Then my term is not ended? Am I still to be imprisoned? Are you still angry with me? She pauses then, and seems to look more closely at him. At another time and with another woman he would be ashamed of his rumpled clothing and his mussed hair, his face badly in need of a shave. But this is now, and she may not be a woman. He’s sure she isn’t.

She shakes her head slightly, and when she speaks again her voice is edged with slow realization. You are not my adjudicator.

She steps forward without stepping, her star-filled hair rising around her as if blown by a breeze he can’t feel. Her hands lift with real purpose now, and the first time they touch him he thinks of ice so cold it burns. Then touch me, would-be liberator. Aiwa, touch me… it has been such a long time.

She does not have to tell him. She is already touching him, and to that he thinks there can only be one answer.

He manages to get them out of the cylinder and then they sink to the floor, her levitating body coming to rest on it at last, and he has time to wish that he kept this deck cleaner before she closes a burning kiss over his lips and he thinks of only her, her breasts curving into his palms as if they ache to be there, nipples so hard they no longer feel like flesh. When he pulls back to look at her beneath him, he can see light moving beneath that glass-like skin, not veins or organs but electrical impulses, tiny surges of power. He lowers his mouth to her, takes her nipple between his teeth and bites down and he could swear he sees sparks.

She moans and clutches at him, and it doesn’t take very much to make himself forget how different this is, how strange this is, how remarkable that he remembers how to do everything and that what he does can give her pleasure. He’s stripping off his rumpled clothes and she’s helping him with her icy fingers; he’s looking up for permission as he slides between her thighs and she’s already shoving his head down, gone from so calm to so frantic in a matter of minutes. She tastes like lightly sugared milk and the succulent juices of a broiled hen. She tastes like he somehow knew she would taste. She comes explosively and this time he knows he sees sparks under her skin, lines of chain lightning shooting up into what would be her spine.

She doesn’t give him time to rest and she does not take it for herself. She’s pulling at him again, dragging him up against her, gone from frantic to ravenous, and part of him is beginning to be a little bit afraid. She reaches between them and grasps at his cock and he cries out, because it hurts, it hurts almost as much as it did when he woke in his bunk with dreams of her and of Baghdad still echoing behind his eyes. She strokes him and the pain is bowled over and forgotten. She is opening her legs for him, rolling up with her hips, her whole body like a hungry mouth. He falls into her and she hooks her legs over his hips and takes him, her long arms curled around his neck and the whisper of a hundred half incomprehensible demands and entreaties between his ears.

She is Baghdad, he thinks fitfully. They are one and the same, new, ancient, enticing, hungry. Baghdad rebuilt, center of the new world, rich with the wealth of the global economy, swelling with all the nations, reaching out to take him in. Trying to hold on. Which is why he had run, and now he is caught again. She is Baghdad, gleaming and seductive; she is the stars over him and the hot roof beneath, she is the lights and the noise and she is touching him, and this time he doesn’t pull away.

Later, when they lie together in the tangle of his clothing and he notes that her skin shines without a drop of sweat, she tells him that she will give him a gift. She will let him choose how he dies.

This entry was posted in Erotica, Excerpt, M/F, Science fiction. Bookmark the permalink.

One response to ““Catch and Release” up for a best-of vote(!)”