Falling Through the Screen: Gaming, storytelling, and why they need each other 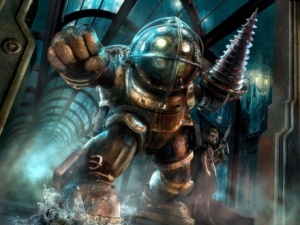 it is, I’ve invested a lot of that in stories. I wouldn’t go so far as to say that stories have kept me alive–I’ve been fortunate enough that I’ve never yet been in circumstances that dire–but they have definitely made my life more worth living than it would be otherwise.

I’m also a gamer. All that stuff about time and energy? It applies here too. While I am a writer, I’m not a game designer, so I can’t claim any of that time and energy in creation. But I like games. I’m invested in them.

Shockingly, not much was settled, but some of it was interesting conversation. And it got me thinking: totally aside from any debates regarding what is and is not “art”–which I hope we can agree are basically pointless and usually every bit as silly as what Ebert said–this statement just did not strike me as true on a gut level. It didn’t strike me as true partly because I don’t think it makes a whole lot of sense to make those kinds of broad, sweeping assumptions about a medium that is honestly still pretty much in its infancy, but it mostly didn’t strike me as true because of my own personal experience as a gamer. Because of why I play games, because of why I love games, because of why I’ve invested so much time and energy in them (which I will get to in exhaustive–nay, nauseating–detail).

So that was probably the genesis of this essay. But there’s also a more recent spark to this particular fire: Tom Bissell’s really excellent review of Rockstar’s L.A. Noire. It is, as I say, a really excellent review; aside from being a terrific writer, Bissell is a very thoughtful guy, and he has a lot to say here that’s worth paying attention to, about games and storytelling in general and what makes the combination of the two succeed or fail.1 But he does say one thing that, although it’s not at all as silly as what Ebert had to say about games and art and why one can’t ever be the other (never ever!), I find myself in some disagreement with.

Bissell says: “Interactivity sabotages storytelling. There is no longer any use arguing to the contrary.” And I immediately went wait, whoa. Because no. Just no. That really couldn’t be any further from the truth of my experience with games, which is that interactivity enables and enriches storytelling.

But what Bissell is talking about makes sense in specific contexts. The shortcomings he describes with the particular type of game that L.A. Noire is match my experience as well. So then I started thinking about actual types of storytelling and interactivity and how one kind of game can succeed where another one is ambitious but very flawed. Because it’s been my experience that the right kind of interactivity coupled with the right kind of storytelling can’t be beat, but that it takes a careful mesh of the two to get the job done. They have to work seamlessly. The boundaries between them have to blur into nothing.

So that’s what this is is all about. Storytelling, interactivity, games, and why I think it works when it works and why I think it doesn’t when it doesn’t. It’s also about some exciting possibilities that I see in the medium, and new places that I think it might go. Mostly, though, it’s a love story about me and games, about games that I have deep affection for, that really touched and transported me, that reminded me why I love stories.

Because, again, when everything is clicking and I’ve found the zone in which I really love to be, I ultimately don’t perceive much difference between the two.

This is going to play out over a period of about five weeks. This was the introduction. Next week I’m going to talk about my earliest experiences with video games, the first time I recall seeing one, the first time I remember playing one and going holy shit, the years after where I fell deeply and hopelessly in love with them. The week after that, I want to devote an entire post to first-person shooters, with a focus on Valve–because I really think they’re unmatched when it comes to the happy marriage of telling awesome stories and blowing shit up in a really awesome way (also thinking with portals). The week after that, I intend to talk about sandbox games with a particular focus on Rockstar–arguably one of the most ambitious companies out there when it comes to gaming and storytelling–and on what they do well and don’t do so well. Finally I want to finish up with a short discussion of what I see as a new kind of storytelling in games, a kind that builds its power much more on atmosphere and emotion than on a straightforward narrative.

Hopefully this will all make some kind of sense in the end. In no way do I presume to be comprehensive in the games I choose to discuss, nor do I make any serious pretensions toward high-level critical writing. This is just what I’ve experienced and what I think about it, with some fumbling extrapolations outward. Which is really what most stories are, anyway.

1 Bissell has also written Extra Lives, which looks like an absolutely fabulous book but which I have sadly not yet had time to sit down and read.

This entry was posted in Gaming, Musings. Bookmark the permalink.

4 responses to “Falling Through the Screen: Gaming, storytelling, and why they need each other”